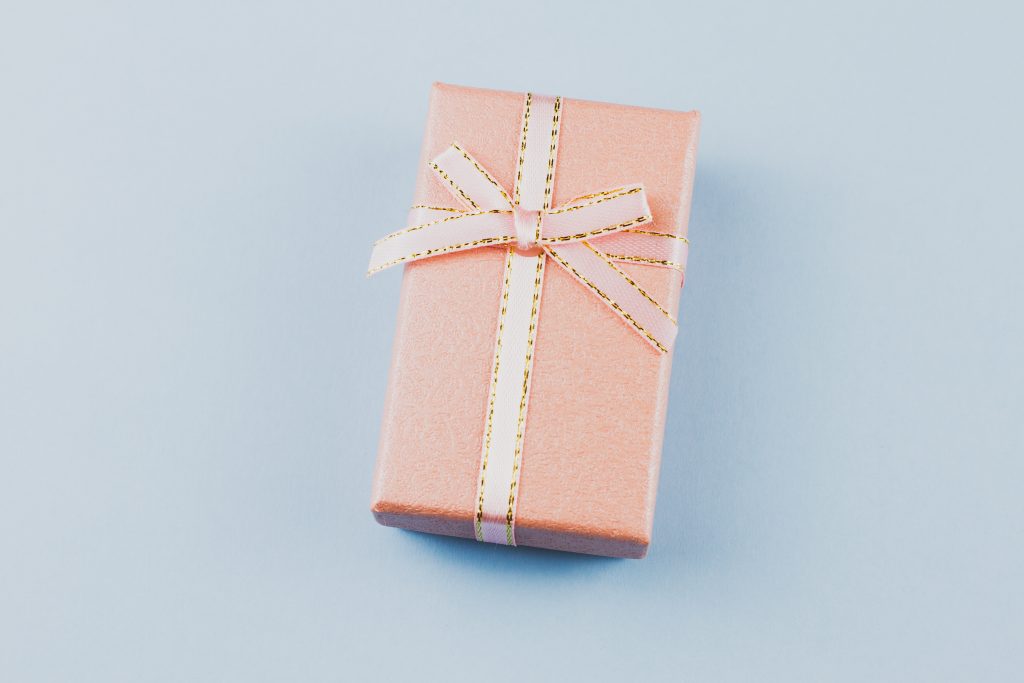 When John received his orders for his year-long deployment to Afghanistan, I felt exceptionally helpless and completely powerless. I started thinking about the future and what I could do to make it easier for John.

My family is big on celebrations. We celebrate pretty much everything. And why not? Life is too short. I wanted to make sure that John had things that would make him smile and make each day a little special during what was going to be a tough year for both of us. 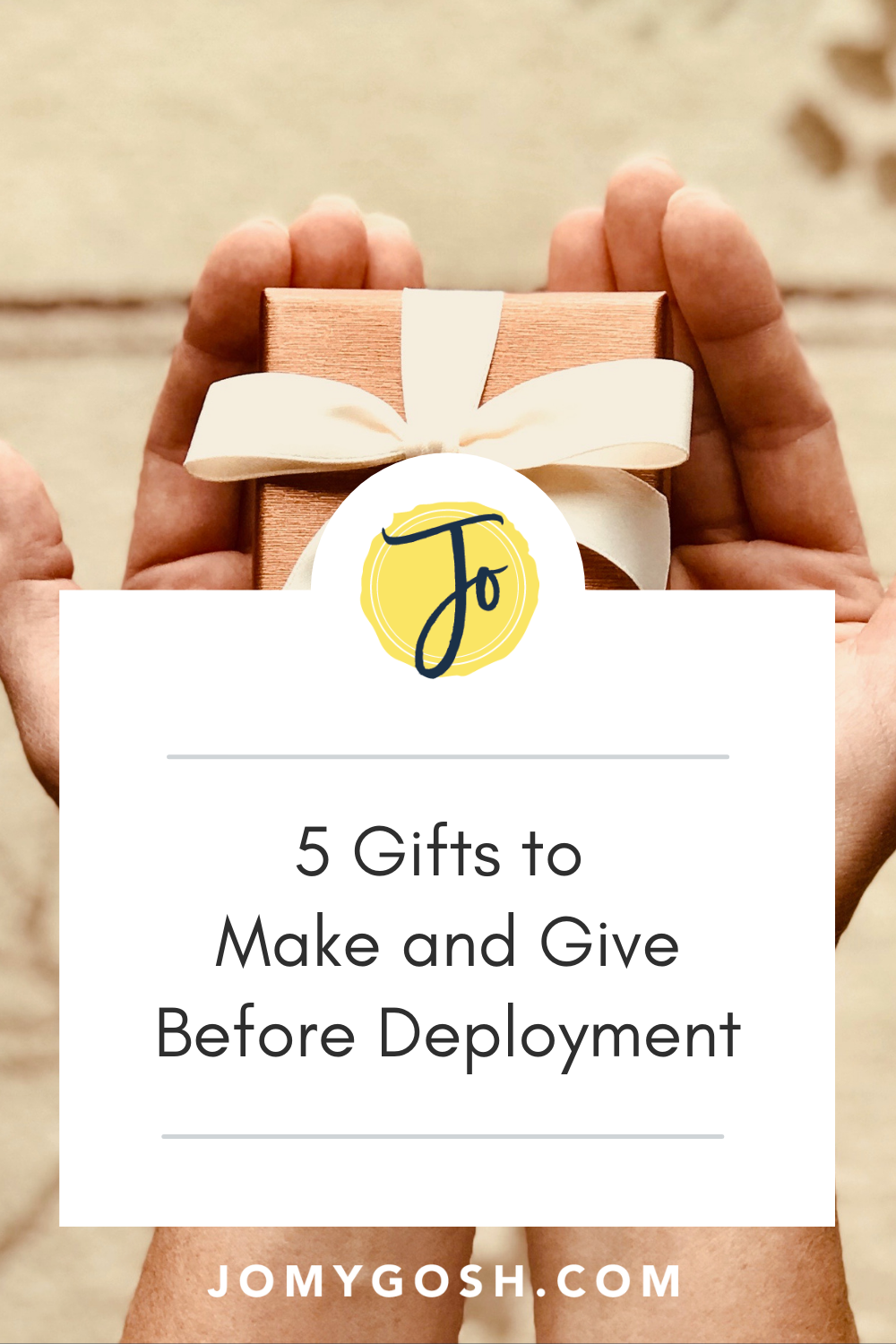 This was before I had a blog and before I thought anyone would be interested in our deployment journey, so I didn’t really document what I was doing. Now, I wish I had! So, while I don’t have photos for everything, I hope these ideas inspire you for whomever is going away for a bit in your life.

Deployment Gift #1: A Month’s Worth of Letters

If you’re on Pinterest, you’ve probably seen at least twenty different iterations of this idea. Last May, I decided to make small envelopes (from scrapbook paper) using this pattern. I wasn’t sure how long it would take for letters to begin arriving to John, so I gave him 30 envelopes to open until the mail started arriving. Some of the envelopes had directions (“Open this when you’re sad,” “Open this when you’re homesick,” etc.) but not all of them. I filled them with letters, Bible verses, song lyrics, photos, and jokes.

Because we had known for so long that John would be leaving for a year-long deployment, I had a long time to worry… and worry… and worry some more. Oh yeah, and cry. I did a lot of that too. To keep myself busy and feel like I was doing something, I decided that I would make 730 origami stars— enough for John to open one in the morning and then again in the evening. I wrote little messages on the inside of them and put them in a plastic, see-through paint pail from Michael’s. I used 12 x 12 scrapbook paper (like this K&Company Jubilee Designer Paper Pad, 12-Inch- by-12-Inch

) in the hopes that they would double as a little spot of color in otherwise pretty drab surroundings. (If you want to make your own, strips of paper that are 12 x 1 or 12 x 1/2 work perfectly.)

I haven’t seen this idea on Pinterest (but of course, that doesn’t mean it’s not there). I had a photo-a-day calendar hanging in my classroom last year, and I decided I would make one for John too. I made a 12-month one on Microsoft Publisher and typed messages or dropped photos of us and our adventures into the spaces for each day. I loved making the calendar (and honestly, it didn’t take too long at all.) I thought about taking it to Kinko’s to get it printed and bound, but I ended up printing it on my inkjet, punching holes in the top, and using ribbon to tie the pages together. (Yes, in this sample, there are some empty squares, but that’s intentional– some romantic messages need to stay just between the two of us!) 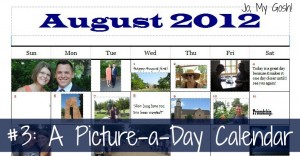 The materials that John had originally received said that mail may take up to a month to be delivered to his base. Taking this quite literally, I decorated and sent John’s first care package about two weeks before he left. That would mean that he’d have two weeks after he arrived in Afghanistan before he got a care package. Perfect: there’d be time for him to get moved in an situated, and he would be blindsided by getting a care package so quickly! 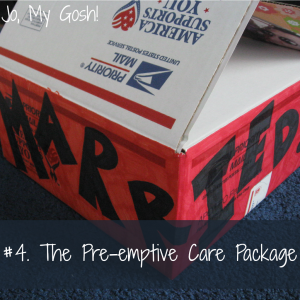 Much to my surprise, when John’s command met the people they were replacing at the airstrip, he was greeted by an officer who looked at his name tape. “You’re getting married!” he told John. When John said, yes, he was, the man laughed and handed him my obnoxiously decorated care package that proclaimed, “We’re getting married!!!”. He told him that they had received the box a week before John’s command’s arrival, and everyone had been waiting to give it to him.

Whoops.
Still, I love the idea that John had a box immediately on his arrival. And I kinda, sorta love that the box was obnoxious. It at least gave John something to smile about during the first day in-country!

(Check regulations before you do this. The box just happened to get to John by dumb luck. You don’t want to get your soldier/sailor/Marine/airman/Coastie in trouble before they even show up! If you’re too nervous to send it before they leave, send it the day of or the day after they deploy. They still won’t be expecting to receive a care package so quickly!)

John and I draw cartoons involving a little crab on the letters we send to each other. One of the things I sent along with John was a small, red, Beanie Baby crab. (Okay, you got me, I didn’t make the Beanie Baby. But I did write a goofy, little poem about him and tie it to one of his claws.) At first, I was a little worried about giving him a stuffed animal, but it turned out that he really liked it. The little crab sometimes makes guest appearances on Skype as he scuttles across the screen and waves. If John has to step away for a moment, the crab takes over the screen as the holding pattern until John returns. 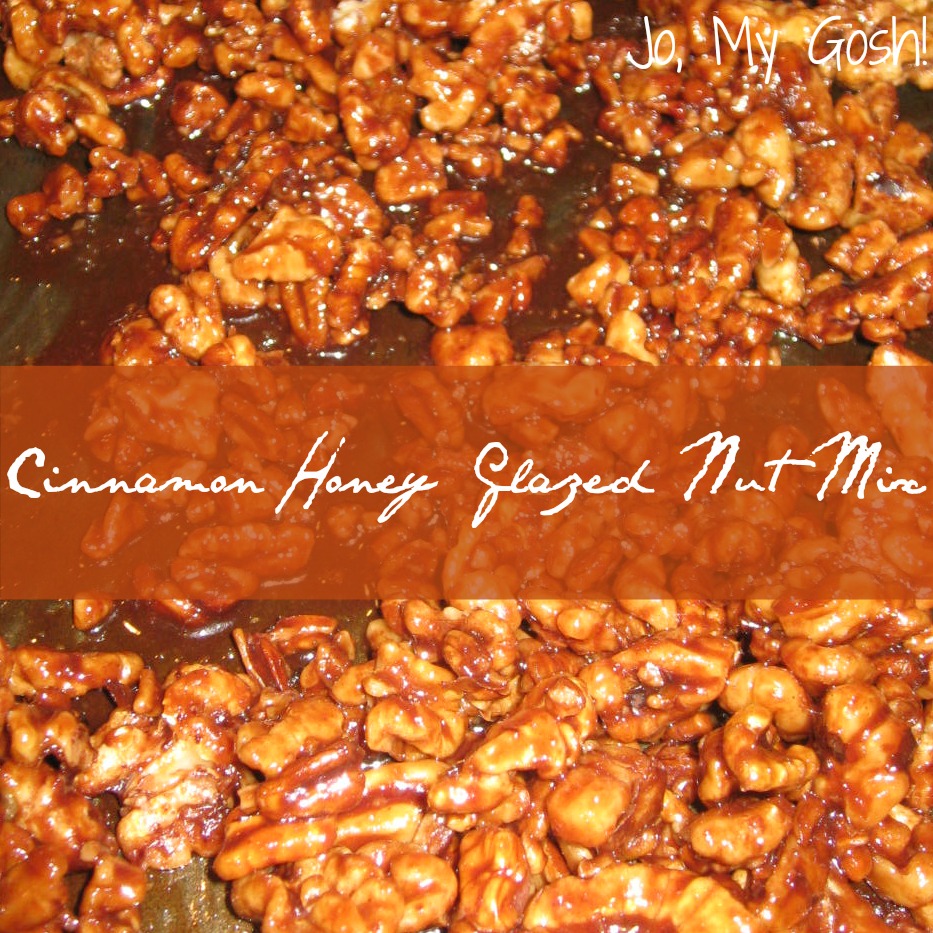 Every time I’m gearing up for another care package, John asks me to send him more nut mixes. I promise this will be the last 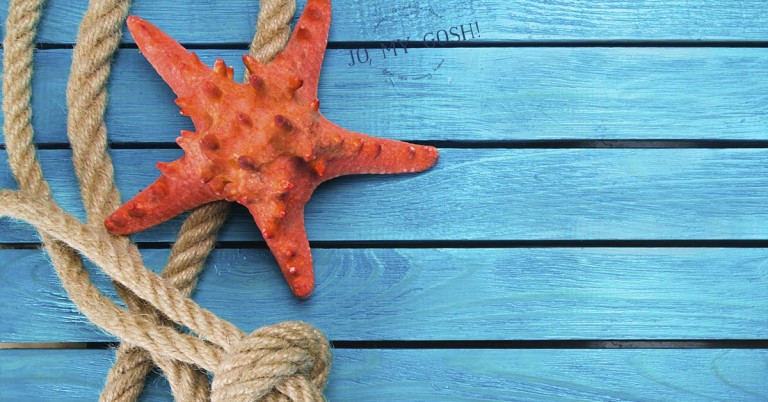 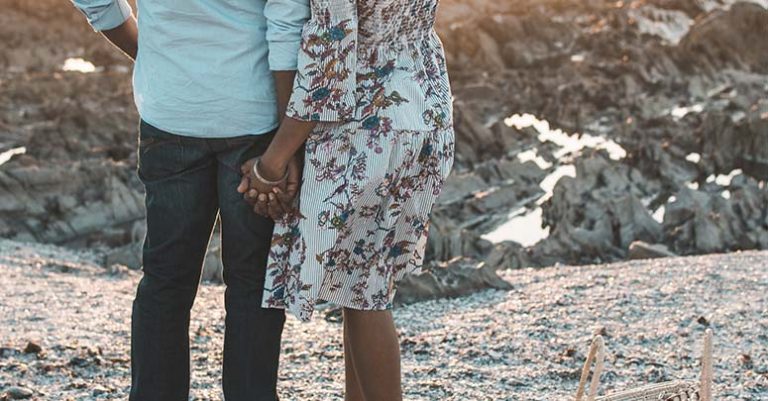 Here’s How to Plan for Military Retirement

Welcome Charlene, a military spouse and guest poster today! Life is full of transitions and stages – nobody knows this better than military families! For