Tracy is back with a really cute idea for a care package– a minion one! (Who doesn’t love the minions from Despicable Me?!) I am so humbled that Tracy is allowing me to share this adorable care package with you!

You might remember Tracy from her Postcard Pillowcase idea. She and her husband, Nick, are newlyweds (having just eloped on Easter 2014)! Currently, Nick is deployed with the Air Force– their second deployment together, but his sixth with the military. They live with their one-year-old boxer mix, Rue. (And for those of you who love the Hunger Games, yes, they named her after the character!) 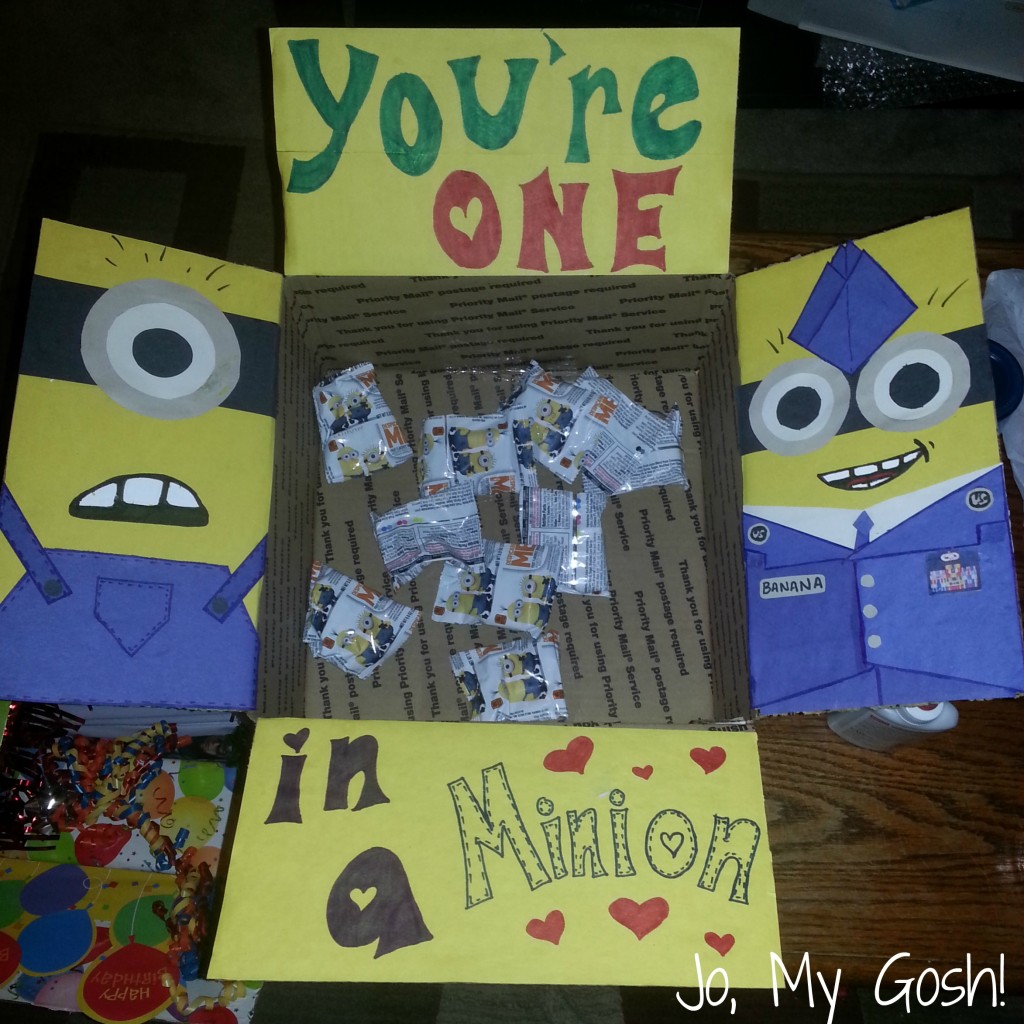 What Tracy filled the box with

“It was a random box this time. I got Minion gummies. There are also minion crackers. My husband works maintenance on a plane and they always talk about using duct tape on the planes, so I sent Minion Duct Tape! Other than that, I added in protein bars and a cooling towel.  Couldn’t fit much more because I had to send his flight suit, but I’ve seen minion birthday party supplies, if you wanna do it for a birthday.”

How Tracy created the box

“The background is all yellow construction paper. I used the bottom of a glass cup to measure the grey circles (about an inch in diameter), a small can for the white circles (about a 1/4 inch smaller) and then a bottle cap for the black circles. Just guesstimate on whatever you have for the circles, depending on how big/small you’d like them. Then I just looked at pictures of them on my computer.”

How Tracy made the Airman minion

“The Airman minion was a bit difficult. I made plenty of mistakes, almost forgot the white “shirt” and tie! But the school glue made it easy to pick up and move pieces quickly. It depends on what uniform you’d be using, but I think there are Minion pictures in every branch. But I just pretended that every piece I used was another spot I’d be ironing if I was ironing his blues (looking crisp, Airman Minion!). Then for the rack I just printed a small picture I had and cut it out. Make it look authentic by looking at your service member’s uniform! Except I named my Airman Minion, Banana! Then just add details with the Sharpies/markers– the hair, stitches in the overalls and outlining the uniform (to look crisp!).”