Last week, I began my Military Books for Your Military Relationship series. If you haven’t yet, check out Part 1. I’m continuing today with Part 2 and three more books for your consideration. (And don’t forget to check out the conclusion, coming at you on Tuesday!) So, without further ado… 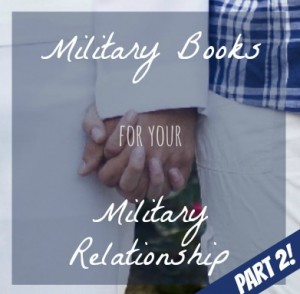 If you don’t have time to read up before deployment, this may be the perfect book for you. It’s short, to the point, and packs a lot of information into less than 200 pages. While the title is vague, Operation Military Family specifically deals with the challenges of deployment, not the general military lifestyle. Schindler also focuses on shoring up the romantic relationship in the military family. (There is more a cursory mention of children– and he does provide some resources for kids dealing with deployment– but there are books that tackle that subject in a more comprehensive, detailed way.) Each chapter ends with a “Bring it Home” worksheet that you may find helpful in condensing and organizing your thoughts.
Separated By Duty, United In Love (revised): Guide to Long Distance Relationships for Military Couples (Updated)

John and I were only engaged for three weeks before he deployed, so I felt like a poser (and yes, a little superstitious) buying and reading books that were specifically for military wives. Because it wasn’t for military spouses, and instead talked about “military couples” I snapped Separated by Duty, United in Love up on Amazon.
For as excited I was buying the book, I was just as disappointed as I read it.  There is a lot of practical resources and financial advice, but I really think other books do a better job offering it in a more factual, unbiased forum.

At points, I would call John and read him laughable passages. While John and I are pretty traditional when it comes to how we conduct some aspects of our relationship– for example, we’ve never lived together because of our beliefs, not just because of our circumstances– we’re both feminists and stress equality in our relationship. Much of the advice seems to come straight from the 1950’s with the burden of keeping the relationship running smoothly almost entirely on the female (including “preventing” a significant other from cheating).

I found the most redeeming and helpful quality of the book to be the vignettes from real military wives. They are spread throughout it in highlighted boxes– it’s hard to miss them! I found myself skipping around in the book to find and read those. But this book as a whole? It just wasn’t for me.

When Duty Calls is a very comprehensive reference book written with a human side. (I didn’t drool on it like I did Dummies.) The book is shot through with both short, poignant anecdotes and important resources and advice. Unlike a few other similarly written books I’ve read, When Duty Calls does not shy away from topics that are difficult within the discussion of deployment– how to prepare and react to situations in which your significant other is reported to be KIA, POW/MIA, or wounded. In addition, the book addresses–rather than ignores– the unique challenges for National Guard and Reserves deployments.

To wrap everything up at the end of the series, I want to corral your favorite (or not-so-favorite) military relationship books. What books have helped you? Which ones were a waste of time? Which ones do you wish you would have read earlier? Which ones grate your nerves? Leave your thoughts in the comments! I want to hear from you!