7 Things MilSpouses and MilSOs Need to Get Over 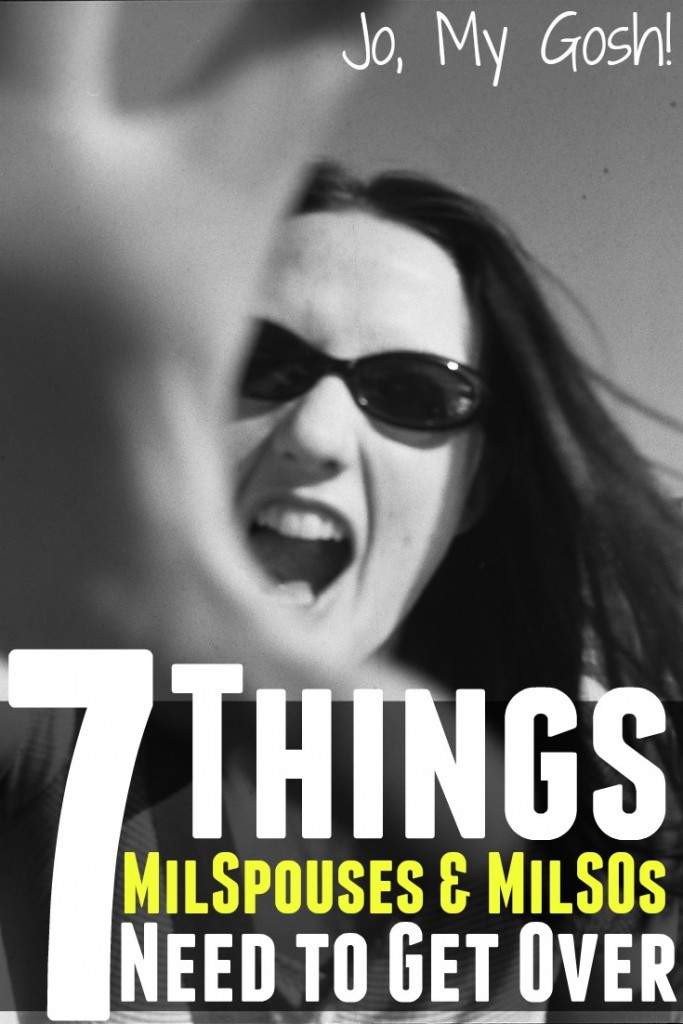 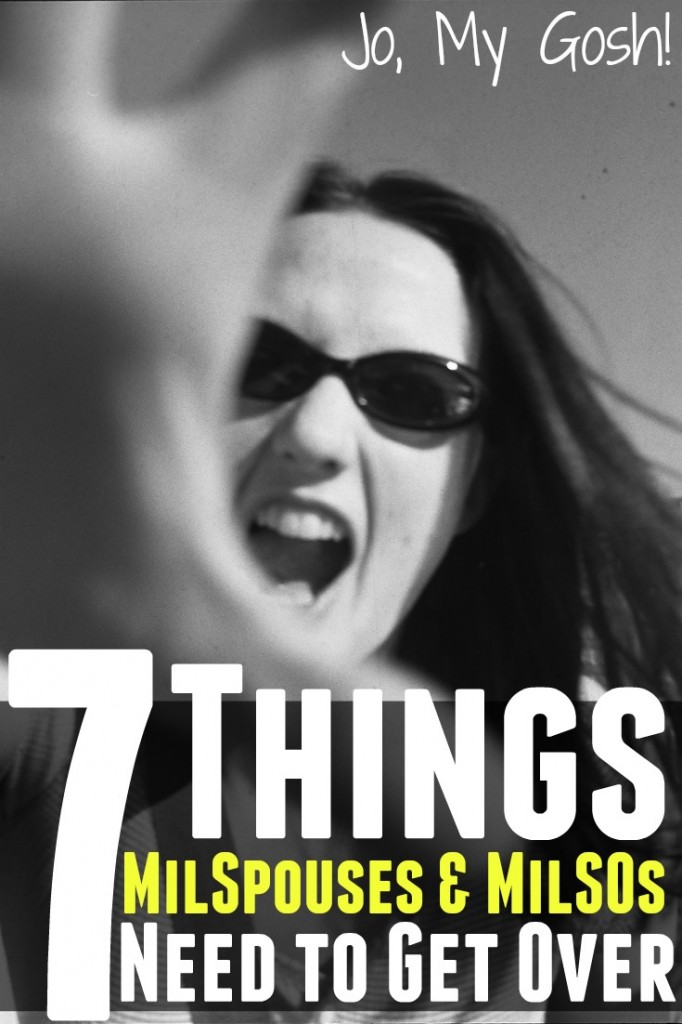 Guys, I’m tired. In the paraphrased words of someone on Facebook, “Military spouses eat their own.” And when you look across the internet, it’s pretty clear to see why that statement rings so true.

So this is a call to all of us– to get over ourselves. And then maybe, if we can do that, we can get back to being awesome.

Trying to win the Who’s Got it Worse Award.

We’ve all experienced deployments, TADs/TDYs, and other kinds of separations of varying degrees. We’ve all been there. We’ve all done that. We all get it. So, collectively, let’s stop playing the martyr card. Instead, let’s hold each other up when we’re going through the suck rather than compete with each other to prove that we’re the one who’s got it the worst. (Spoiler alert: It’s not you.)

Being strong. All. The. Time.

Trolling and cyberbullying (or real-life bullying) each other.

We’re grown adults, people. Let’s act like it– even on the internet where no one sees your face or has to be in the same room with you. Because Jo, My Gosh! readers are amazingly kind and gentle with each other and with me, I never realized how quickly we jump on each other until I published an article about care packages on another site. Within minutes, the trolling began. (Seriously, there’s nothing remotely controversial with care packages!) And if you see it happening, step in. We’ve got to police ourselves lest we continue to perpetuate the stereotype that we’re petty and ugly to each other.

Assuming we’ve all got the same politics, ideas, or goals.

Uncle Sam didn’t issue any of us the same outlook on life. (Tweet this!) Whether it’s military policies, family planning, who or what you vote for, or… well, you get the idea,  be kind and respectful of our community’s differences of opinion. That’s what makes the US so beautiful (and that’s what our significant others are working to help preserve, right?). No one person can speak for the entire milso, milspouse, or milfam experience– and we should embrace those differences rather than shouting them down or dismissing them.

Don’t limit yourself to great friendships and opportunities because of the rank your significant other does (or doesn’t) wear.(Tweet this!) And don’t believe the stereotypes about officer’s wives or enlisted wives or any of the other craziness in between. You’ll just miss out on some really awesome people.

The crazy divide between milsos and milspouses.

While, yes, there is definitely a difference between being married, being engaged, and dating, there is no difference in the love we feel for our significant others– no matter what ring we are (or aren’t) wearing. We feel the same pain at being separated from each other and the same kind of joy at being reunited. If we’re a little more “seasoned’ at military life, we should be offering a helping hand to the newbies.

Expecting perfection from ourselves.

Even though you’re trying to hold down the homefront, run your own business, take care of the pets, make sure your kids aren’t drawing on the walls, exercise at least 30 minutes a day, cook healthy meals, get a degree, and send care packages across the world (oh yeah, and brush your hair and teeth every so often), you probably feel inadequate. (Sounds insane, right? I mean, you’re doing the work of approximately a bajillion people.) I get it. I constantly feel inadequate, behind, and all of those negative things. But we’ve got to let it go. None of us are perfect and pretending like we are– and expecting it from ourselves– is just unhealthy. (Note to myself: read this paragraph every so often when you get down on yourself, Jo.)

Which branch is “better.”

Friendly rivalry is friendly and that’s cool. But sometimes it gets a little less than friendly. Every branch plays an important role in our nation’s safety, and we should both be proud and protective of that. At no time should we look down on anyone’s service. Oh yeah, the whole active duty-versus-National Guard-versus-Reserves divide is stupid, too. They all serve. They all sacrifice. (Tweet this!)

What do you need to get over to be a better version of you?

For the Military Spouse Celebrating a Difficult Christmas 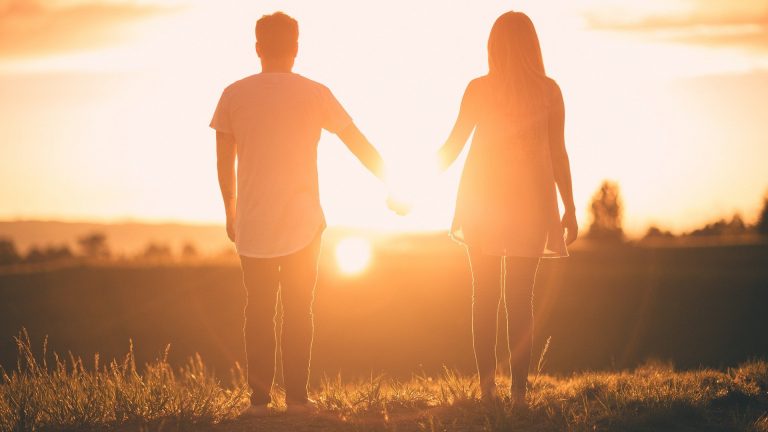 Dating a Military Man: What You Should Know First

When I first started dating my husband, his military affiliation was the furthest thing from my mind. Eventually, however, the reality of being intimately (ahem) 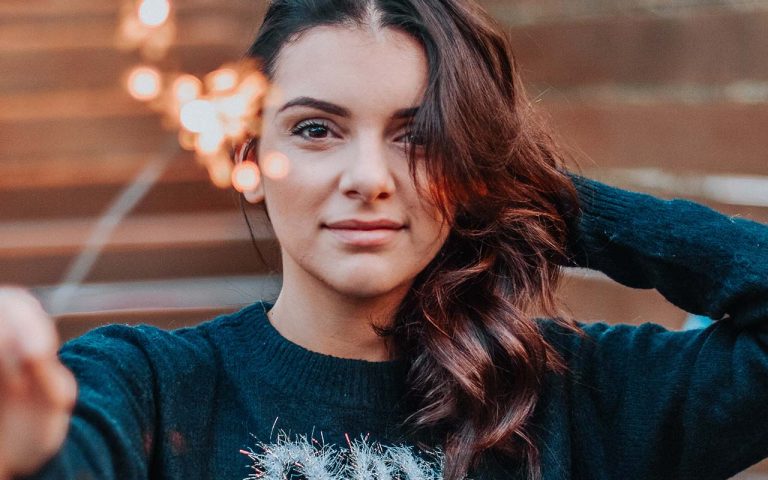