Another TWO Bite the Dust! 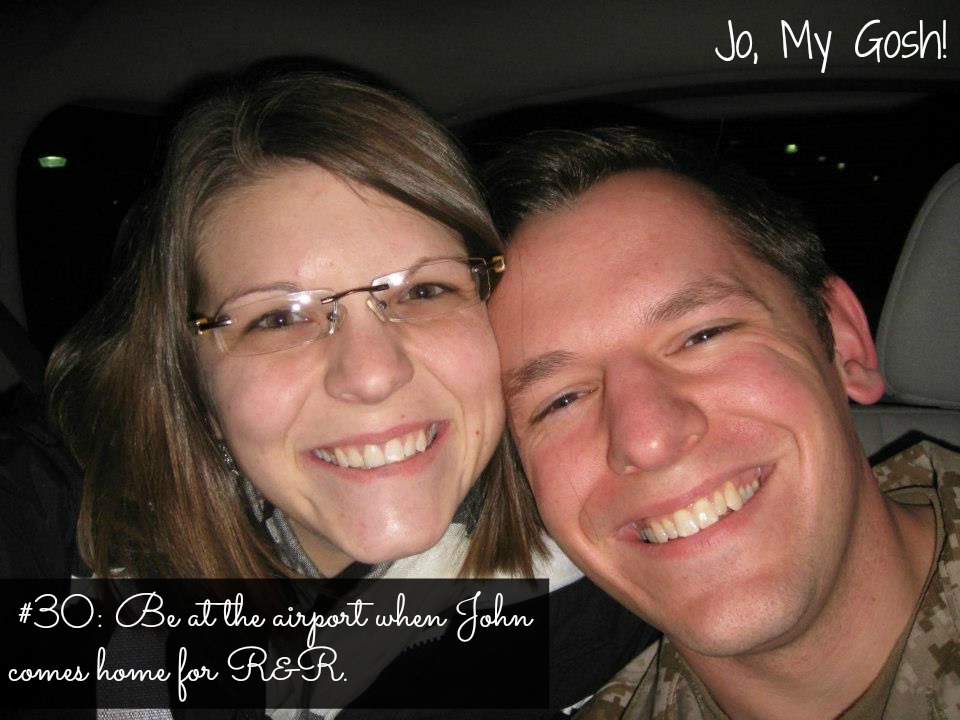 During John’s R&R, I crossed off a few more items from my 100 in 365 list. Over the next few days, I’ll share those. It seems fitting to first write about the bookends of his leave– when he came home and when he left. 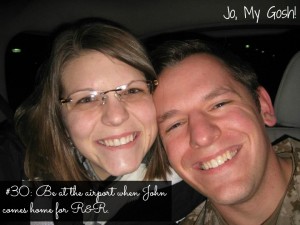 You’ve seen this picture before, but it is one of two photos immediately taken following John’s half-homecoming. His brother took one in the airport of John– and it’s really cute– but I’m in the background, awkwardly staring at something off camera, with my mouth gaping open, slinging my apish arms into my coat. In the interest of — well, let’s be real– because I’m a little vain, I’m just going to post this photo again.

John’s R&R homecoming was amazing. I’m so glad that I was able to be at the airport with his family to pick John up. It definitely did a number on my nerves– when we saw that his plane was at the gate, my hands and arms went numb. (Don’t worry, this happens a lot to me in stressful situations. I’m not having a heart attack. Yet.)

While we sat facing one set of escalators that we were absolutely positive John was going to take down to us, he took the other set, located– of course– behind our seats. Just as I was about to pass out from excitement, John popped up in front of us. Of course, we all freaked out– hugs and kisses all around. I have not been so happy so quickly ever in my life.  And I have never squeezed John’s hand so hard, or looked at him so many times, or smiled so widely. I should have done mouth exercises so that my mouth would not start hurting a few minutes into smiling so much. 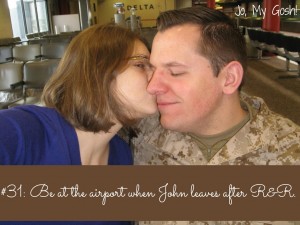 And this scary gem is our goodbye picture. The sad thing is, we took a bunch of photos and in every single one, I look terrible— puffy, bloodshot, red eyes, weird expressions. Just awful. So I opted for the least awful photo– the one where I look like a creeper. And yes, this is the best one out of the eight or so that we snapped. (Did I mention I have awful coordination? I closed my eyes for this picture after I took it. I need to work on things like that.) I’ll just have to embrace its awfulness.

The goodbye at the airport was much harder than I anticipated. We’ve always been a long distance relationship, and, unless you count the time we spent in college being in the same town (which we don’t, since we weren’t dating then), John’s R&R is the longest, continuous amount of time we’ve ever spent together.

For those 15 days, it really was like John’s seven months in Afghanistan had never happened. It was magical being able to talk to him without a Skype delay or a popping internet connection or having to end and restart a call five times before getting ten minutes of talk time. It was almost strange to see his face unpixellated, or to see more than just his head and upper chest at one time.  And the fact that he was 100% safe? That was the best part of all. After worrying for so long, it felt good to… not.

So having to give all of those things up at once was tough. I don’t know if I cried more than I did the first time around, but I definitely cried harder. And I’m sure there were a number of travelers walking by us that I made extremely uncomfortable with my puffy, red face.  And no matter how many times we said, “It’s just [a number less than seven] more months. We already did seven. It’s just [a number less than seven] more,” it still felt like the end of the world.

Originally, John wanted me to drop him off at the airport. And then we found out that airlines will actually issue temporary boarding passes to family members or significant others of deploying service people. So, I got a boarding pass and went through security. Then, John wanted me to leave him at departure atrium. I definitely couldn’t do that. And then we were going to say goodbye in an empty waiting area before John’s plane was called for boarding. But we couldn’t do that either. And then we decided we were going to say goodbye before John’s seating section was called for boarding. Nope, no can do.

Of course, we ended up saying goodbye when they called his section, at the last possible second. Every single moment, even ones that were soggy with tears, was precious. Walking away is always the worst. Every second, I wanted to run back and kiss him one last time or say one more thing or get one more hug, but somehow– and thinking about it now, I really don’t know how I did– I kept walking away.

I wasn’t sobbing or drawing attention to myself, but my eyes were pretty well swollen shut by that point. And I was trying to keep my head down so people wouldn’t see them. I ended up almost walking into a pole. And into a garbage can. And I almost fell down the escalator stairs. It’s a wonder I didn’t walk into someone, but I’m certain that people were avoiding me like the plague.

And now, there’s only two more items to cross off in that section of my 100 in 365 list: Make a sign for John’s homecoming, and be there to see him come home. 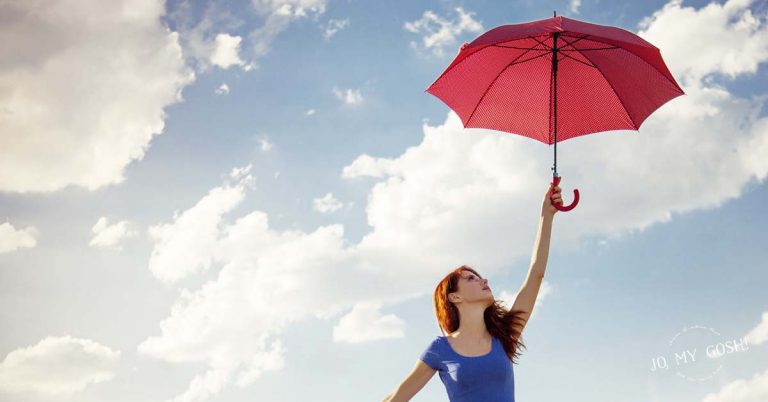 How to Apologize During Deployment or a Long Distance Relationship 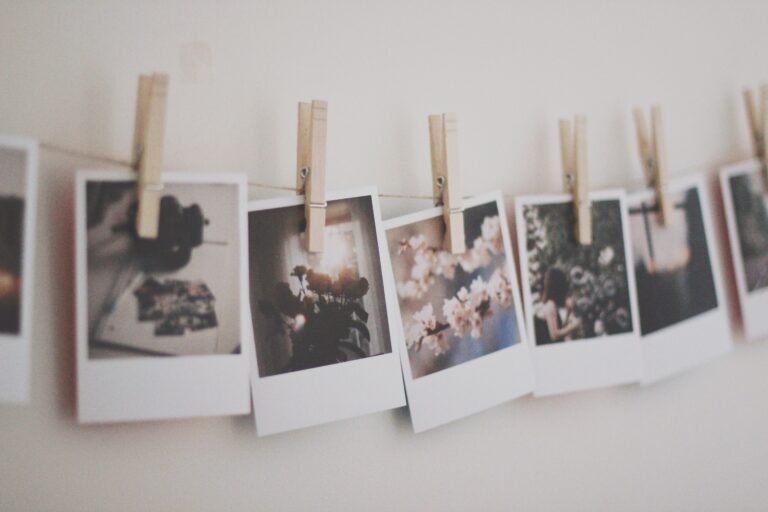 151 Awesome Items for Your Next Care Package

It’s time to fill that care package! A common thread I hear from military spouses and significant others: I’m at a loss for what to 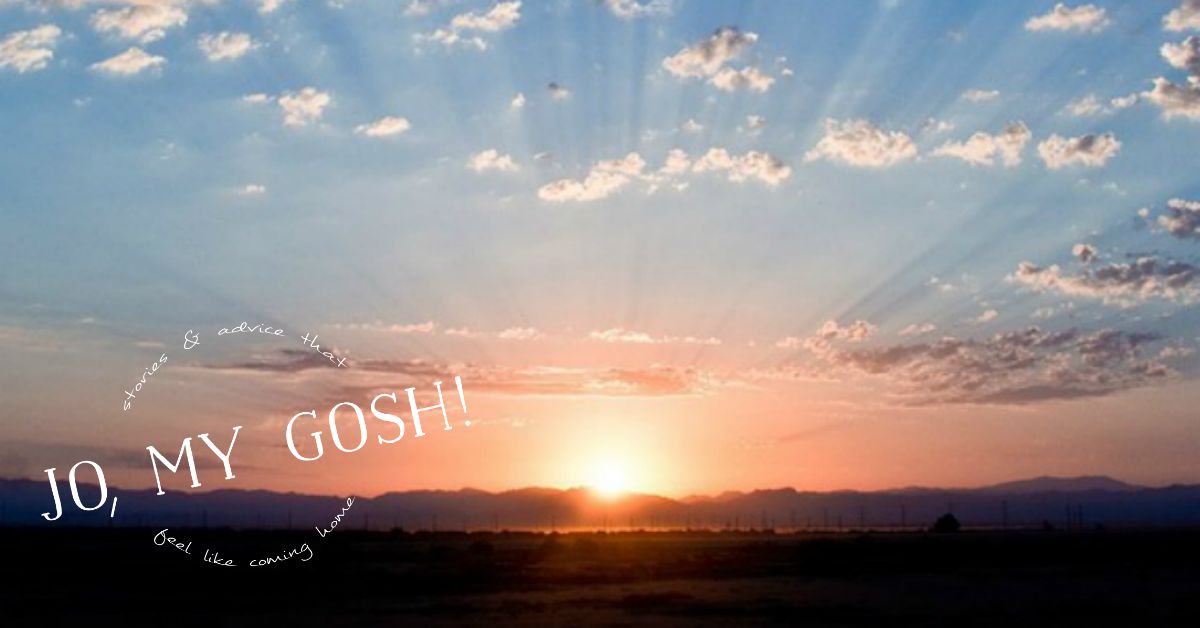 4 Steps Every Entrepreneur Can Take to Optimize Their Morning

Entrepreneur. It’s a label for myself that I’m still getting used to. But now that I’m working on year 4 of the blog and year