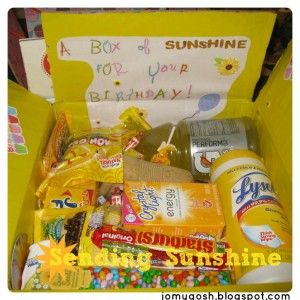 This is it! The last birthday box post for a year (and hopefully, forever, since I’ll only be sending John birthday boxes if he’s deployed again).

I know, I know. Afghanistan already gets a lot of sunshine, especially in the summer, but this is a different kind of sunshine… edible sunshine! 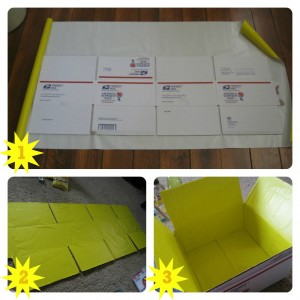 I tried a different technique for wrapping the inside of the box this time around. It would have worked beautifully, had I not used really cheap-o Dollar Store gift wrap (even though it was exactly the color I wanted).  I think the picture makes it pretty self explanatory, but here are the directions, just in case:

It takes more time to do this, but I think it has a nicer, finished look to it than gluing scrapbook paper into the inside, which is my go-to move. 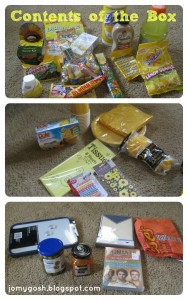 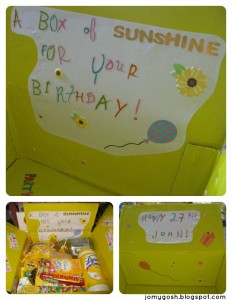 My favorite items from the box– olives, olive tapanade from Harris Teeter (John really likes both of them), manly stationary from American Greetings (you would not believe how difficult it is to find it), a grow-your-own-sunflower kit, and a “bromantic comedy” collection (Knocked Up, The 40 Year-Old Virgin, and Forgetting Sarah Marshall).

So, that’s what the box looked like! I made one HUGE rookie error. In my excitement to send this box, I forgot that Lysol wipes will make EVERYTHING smell and taste like Lysol. I even reminded myself multiple times that I was going to throw it in a few Ziplock bags and duct tape them (and possibly even heat seal them). Did I remember? Of course not!  I’m pretty sure John had to chuck everything edible in the box. It was probably not a bad thing since he didn’t want me to send him a lot of unhealthy food… but it was his birthday, and birthdays just beg for candy (and it’s so easy to find yellow candy, too)!