Today’s is just a quick post and it’s not rocket science. In fact, I’m pretty embarrassed I didn’t think of it myself. Instead, I saw it on (where else?) Pinterest.I shipped John’s Christmas Eve packages (another post to come in, oh, 13 days) about a week ago. I wrapped the Priority boxes in wrapping paper, tied them with bows, and covered everything with packing tape. 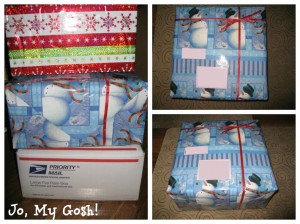 When I took these boxes, I also had a peppermint stick, a birthday present for John’s sister, and two other boxes of Christmas goodies for John’s command from students at my school. And I refused to make two trips to my car… so I shlepped them all into the Post Office at once. I got death stares from other patrons and a very sad, bewildered sigh from the postworker who had the awful fate of processing so many customs forms. I’d like to believe they were just jealous of my superhuman strength and extraordinary ability to balance four boxes and carry a tote packed with a gigantic peppermint stick.